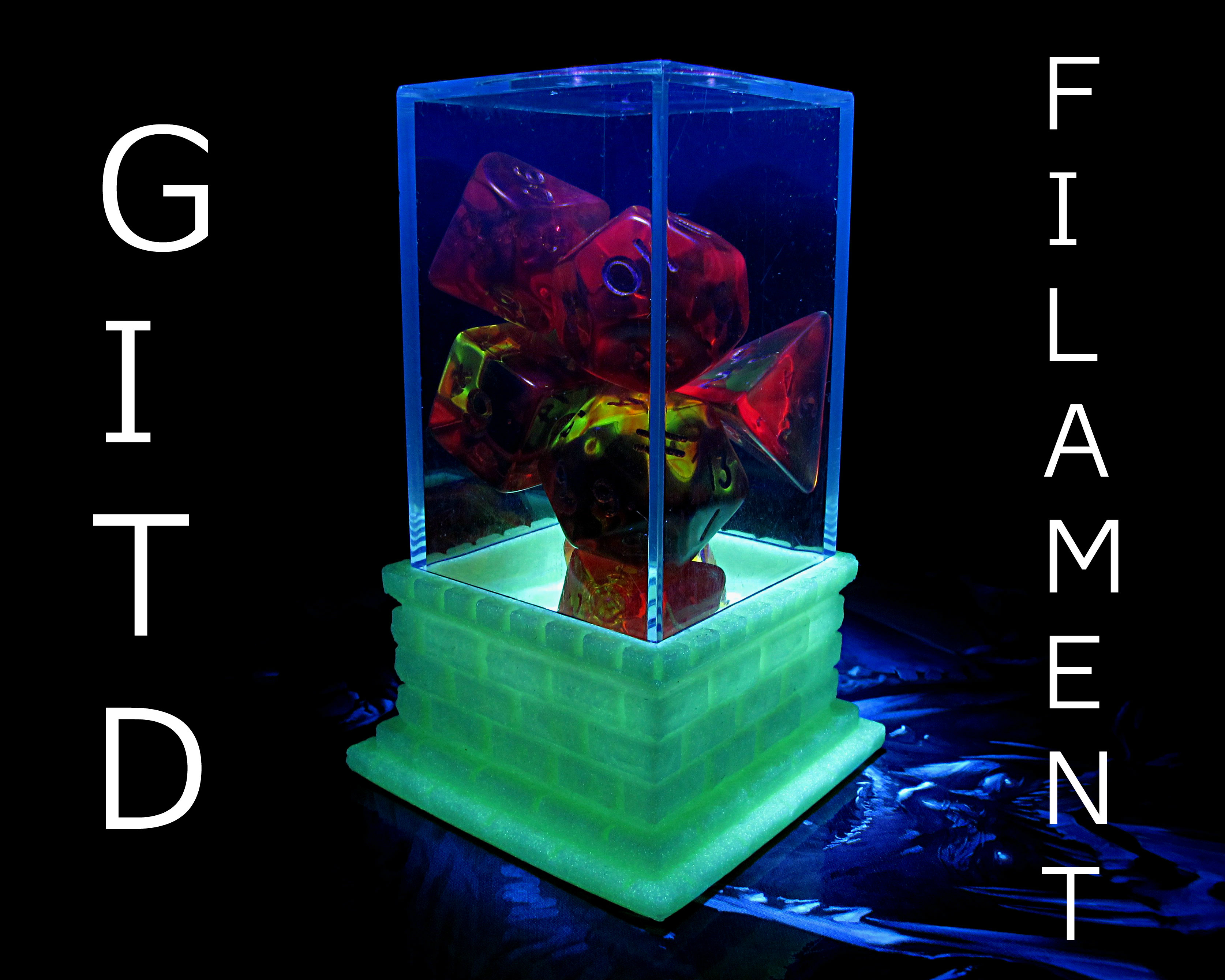 Choosing the best glow in the dark filament can be tricky because it’s hard to tell the difference between one brand and the next. There are only a few colors to choose from, and they all perform similarly.

In fact, without a rigorous testing scheme to measure the following properties, it is very hard to establish a ranking of glow in the dark filaments:

Our Top Pick: Hatchbox. It is bright and lasts for hours. It is also super easy to print with and the color is nice.

Best Glow In the Dark Filament

This problem often arises because people don’t know how to charge glow in the dark filament properly.

If you charge them with LED lights or phone screen, for instance, the glow will probably be fairly weak. But if you expose them to sunlight or an incandescent bulb, they will glow brightly for a long time.

Why does this difference matter? That is because these light sources contain UV light.

Also,  prints that have thicker walls glow brighter than prints with thin walls. So try lowering your infill and adding a few shells in your slicer to get better results.

Another thing to keep in mind when using these filaments is that they tend to be rougher on printer nozzles than regular filaments. That is because the additives that cause the filaments to glow contain particulates that will wear down a nozzle made of brass.

Here’s a quick video by 3D Printing Nerd on Youtube:

Best Glow In the Dark Filament On This List

There are some very highly rated glow in the dark filaments that are top notch.

On this list you will find some of the highest quality filaments available. They are not the best filaments on their own when compared with all other filaments in general.

But they are very good for glow in the dark filaments. Some have unique colors while others come from brands with fantastic customer service.

Also, some are easier to work with than others. Hopefully you can find one that suites your needs.

Hatchbox has produced one of the highest rated glow in the dark filaments on Amazon. With over 100 positive reviews, it is also one of the most highly rated filaments in general. Check out our full review of Hatchbox filaments.

But Hatchbox glow in the dark filament  has without a doubt one of the most reliable tolerances out there, at +/- 0.01 mm.

One of the best things about Hatchbox glow in the dark filaments is that you can print it with settings that are similar to, if not the same as, settings for regular PLA. It is extremely easy to use and will rarely cause any problems with your machine.

Also, it glows brightly and for a long time. Just make sure you are using a light source that produces UV light. Otherwise it won’t charge very much.

Check out this video of a Millennium Falcon being printed with Hatchbox glow in the dark filament:

3D Solutech glow in the dark filament is one of the brightest glowing filaments out there. 3D Solutech definitely didn’t skimp on the amount of additive they put in their filament to give the glow effect.

Like Hatchbox, 3D Solutech glow in the dark fialment  is super easy to print with, has an even flow through the hot end and sticks well to blue painter’s tape, just like it should. It has good tolerances also, at +/- 0.05 mm.

3D Solutech has some issues to overcome in terms of business operations. They’ve been known to deliver the wrong filament and not respond to customer service. We took a star off of our rating for that reason.

But these mistakes are few and far between. The customer service issue is definitely a problem, but if you are having trouble reaching them, try social media.

They seem to respond fairly quickly to messages on their Facebook page. In any case, the quality of their glow in the dark filament is definitely worth checking out.

The main problem with it is that it clogs a bit more than other filaments and it isn’t the easiest filament to print with. It is isn’t so easy to find the proper printer settings for it, but with a bit of effort you can get good results.

And if you have too much trouble to make it worth your while to use, Gizmo Dorks filament is very good and will work hard to fix the problems until you are satisfied.

MeltInk3D glow in the dark filament is definitely one of the best filaments available on Amazon. It is very good quality and easy to use. Best of all, it glows brightly and charges quickly.

The only potential downside to this filament is that it is a bit rougher to work with than other filaments. You should always use a steel nozzle with glow in the dark filaments and that is particularly true for this filament.

This filament will quickly wear out a brass nozzle over time. If you plan to print a lot with these filaments, ensure that you are using the right type of nozzle.

Final Thoughts On Glow in the Dark Filament

As long as you remember to use a steel nozzle if you intend to print a lot of glow in the dark filament and to charge the objects in UV light sources, such as incandescent light bulbs and sunlight, you should have no problems. They are easy to work with and not too expensive. Check their prices on Amazon.

If you have comments about anything we’ve said or want to bring another glow in the dark filament to our attention, feel free to leave a comment below. Happy printing!

1 thought on “Glow In the Dark Filament Review”